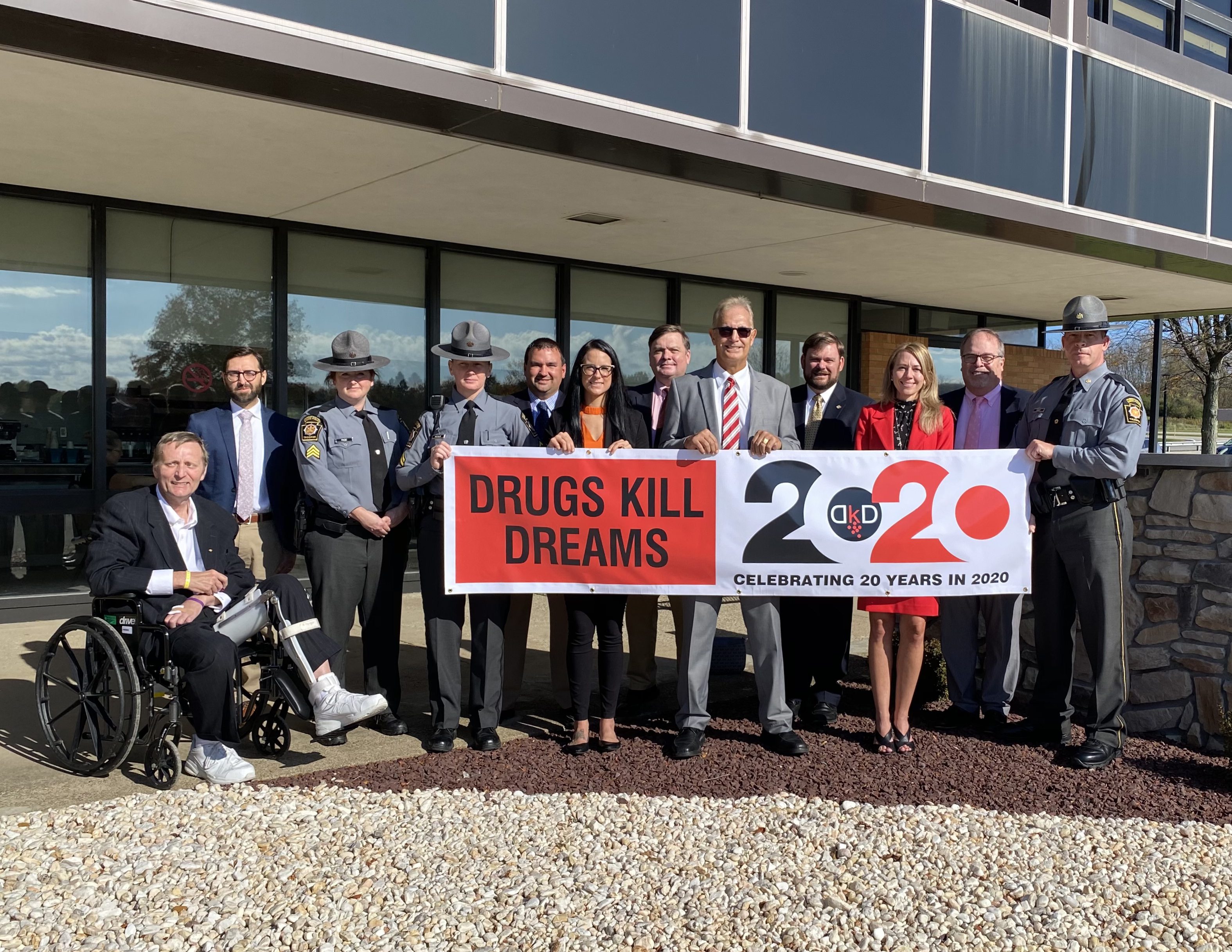 Ford City MDJ J. Gary DeComo — the initiative’s founder — thanks those who have assisted him throughout the years during event

Judge DeComo ultimately used that slogan as the name of his drug prevention program, which, in 2020, celebrates its 20th anniversary.

Two decades on, that one-time student — now Tara Maruca — recently returned to Armstrong County, among other special guests, for a celebratory event in commemoration of the initiative she helped conceive at ACMH Hospital in East Franklin Township. Today, Maruca is a Life Skills support teacher for the Blairsville-Saltsburg School District.

To thank him for his continued support for the program, Judge DeComo (right), presented a hockey stick to State Sen. Joe Pittman (R-41), which was made of material from the former Civic Arena in Pittsburgh.

Judge DeComo said when he was first elected magisterial district judge in 1994, he immediately recognized a need for drug and alcohol prevention education in the community, and began visiting schools and community events.

As mentioned previously, he established the “Drugs Kill Dreams” program in 2000.

To thank him and the ACMH Foundation for their years of support for the program, Judge DeComo presented ACMH CEO and President John Lewis an autographed football signed by Pittsburgh Steelers Hall of Fame linebacker Jack Lambert.

In 2007, he began a campaign to put prevention messages directly into all pain reliever prescriptions at pharmacies, to help prevent children from abusing medication in their own homes.

Today, there are programs and signs for Drugs Kill Dreams all across the county.

During Friday’s event, in an interview with the Leader Times, Judge DeComo said he would like to have the slogan be used across the state, across the country, and across the world, the latter of which can come true with the help of Lions Club International.

“I think it could help prevention efforts around the world,” DeComo said.

Judge DeComo thanks all involved for help and support

Judge DeComo said the goal of the program is to help educate the community, particularly children and families, about drug prevention and the dangers of drugs.

He not only offered thanks to those in attendance at the event, but to all of the people who have helped support and volunteer for the program throughout the years. He added it has been a lot of hard work.

“Nobody can do this on their own,” DeComo said. “I appreciate all of the support.”

Judge DeComo also expressed gratitude to Pittman and Pyle for their continued support, Lewis on behalf of ACMH and the ACMH Foundation, Judge McClister, Charlton, and PSP regarding law enforcement support, Watterson on behalf of ARC Manor, as well as Myers, even though he said he is the last person someone wants to see regarding drug use.

Throughout the past 26 years, Judge DeComo said, he has given drug prevention presentations to more than 100,000 children.

He added that in Armstrong County, 60 to 70 percent of criminal cases either involve DUIs, drugs, or criminal acts committed by people under the influence.

Lewis said he and the foundation are proud and happy to support the program, stating it is in line with one of the missions of the hospital — drug prevention.

He added that he not only sees plenty of signs for the program across the county, but hears kids bring it up in conversations, as well.

“It’s absolutely imperative to keep the message in the community,” Lewis said. “We still have a long way to go.”

To help spread awareness of drug prevention and of the program, Pittman said he and Pyle helped push legislation through the state to have Oct. 23 be declared “Drugs Kill Dreams Day” across the commonwealth.

Pittman, stating he is a “sincere believer of prevention,” thanked Judge DeComo for his years of service to the community, and he also expressed gratitude to everyone involved in helping the program.

Pittman added he doesn’t want the COVID-19 pandemic to take away the focus of the drug problems across the state, such as the opioid epidemic.

Judge DeComo issued rewards to Maruca, Pittman and Lewis for their efforts for the program.

During the ceremony, DeComo presented Maruca a certificate of appreciation, as well as a framed portion of the roof of the former Civic Arena in Pittsburgh, which was prepared by Lenape Technical School students, and which was signed by Pittsburgh Penguins co-owner and former player Mario Lemieux.

To Pittman, he gave him a hockey stick made up of metal that was part of the Civic Arena.

To Lewis, he gave him an autographed football signed by former Pittsburgh Steelers player Jack Lambert.